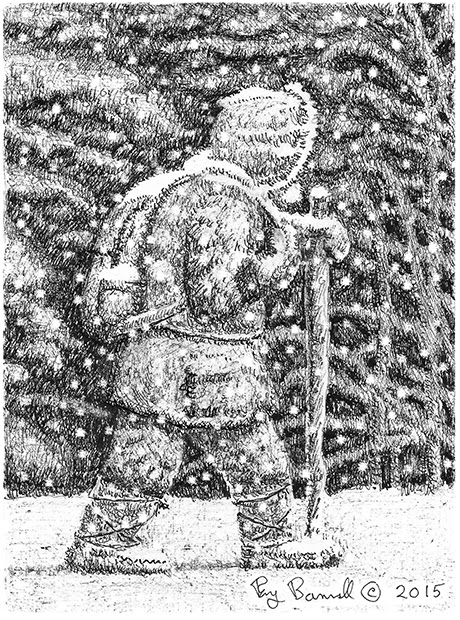 Take a drink with a friend or friends when you have a chance.

When using a man’s cabin and before leaving wash the dishes, leave shavings and kindling and as much wood cut as you used. Also, close the door of the cabin. If barricaded against bears, put the barricade back.

Never ask a man what religion he has for the great outdoors is his place of worship.

Never speak of women disrespectfully; we all had mothers.

Always give a fellow a lift if the going is tough.

Don’t abuse a dog. He is the best friend you have on the trail. Be kind to dumb animals, they remember you.

Don’t kill any game wantonly…only what you have to kill for your need or for someone who is out of meat.

Call the musher in and offer him a mug up or feed and if he is tired give him a shakedown.

Don’t waste any animal by shooting at them for targets. The last cartridge may save your life.

Keep your matches and footgear dry on the trail and never drink whisky or other spirits on the trail; it may be fatal to you.

Don’t wander around when the fog comes in and you can’t see where you are going; wait till it clears up.

Don’t leave any lights or candles burning or heavy fire in the stove when you are away from the cabin.

Don’t set fire to the woods. It will destroy the wildlife and game.

Parboil your bacon before frying; it will not cause you so much rheumatism. Also, be sanitary about the camp so as not to pollute the water and atmosphere.

Don’t tell the other fellow your troubles, especially love or matrimonial affairs. He may have a lot of his own.

Keep off the other fellow’s trapline, both literally and categorically speaking.

Joseph Ulmer (1874-1958) was a resident the Circle Hot Springs area. In addition to mining, he worked as an engineer for the Alaska Road Commission and was a Territorial Road Commissioner. He was an inveterate writer—penning scientific and historical articles, satire, criticism and poetry. Ulmer published newspaper columns under the pen name, “Cassiar Joe.”