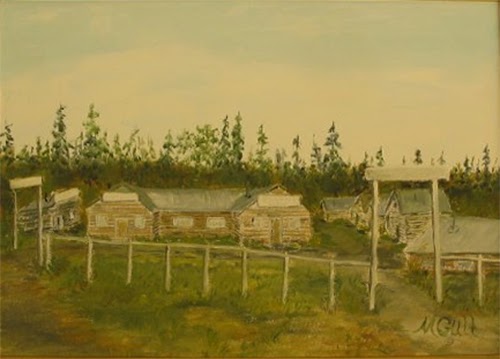 This is a painting by Marge of Munson’s Roadhouse, about 40 miles from Fairbanks. The roadhouse was located near the confluence of the Salcha and Tanana Rivers, and was also called Salchaket Roadhouse.  (Salchaket means “the mouth of the Salcha.”)

William Muson established a trading post and roadhouse here in 1904. The trading post supplied goods to prospectors in the area and to the residents of a nearby Athabascan village. There was a ferry across the Salcha River near the roadhouse during the early years of the Valdez-Fairbanks Trail.

The roadhouse burned down in 1925. That was the same year a bridge across the Salcha River was completed. (Curious, since the new bridge would have reduced the need for travelers to stop at the roadhouse.)

Genevieve Marguerite (Marge) Gull (who died in 2013) came to Alaska with her husband in 1938, living first in Fairbanks and then Anchorage. She was an amateur painter and painted 49 of the roadhouses along the Valdez-Fairbanks Trail.

I assume that at least some of the paintings were done from photographs since many of the roadhouses disappeared long before Marge came to Alaska. This painting is in the collection of the Valdez Museum.  I’ll be adding more painting periodically.